For more than 30 years, the Kindersley and District Arts Council has been bringing some of Canada’s most beloved entertainers and performers on the cusp of superstardom to perform for

Kindersley audiences. Frank Mills, Patricia Conroy, Connie Kaldor, the Canadian Brass, Lewis and Royal, and The Canadian Tenors are among the hundreds of names who have graced the local stage.

Each year, the Kindersley and District Arts Council hosts the Stars for Saskatchewan series, a showcase of eight concerts and 3 fundraisers held throughout the year and featuring performing artists from all across Canada.

Visual Arts programming has also been a component of the Kindersley and District Arts Council throughout its 30-year history. This has included a number of locally-produced art exhibits, plus several travelling exhibits displayed in Kindersley through partnership with OSAC.

Kindersley and District Arts Council has also hosted its own film series, in partnership with the Toronto International Film Festival from which the title features are selected. Typically three films are shown each season at the Sunset Theatre. 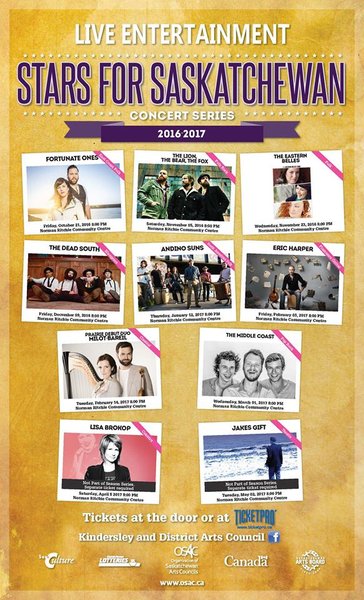 The Kindersley and District Arts Council was formally established on October 26, 1977 and became the 21st arts council to join the Organization of Saskatchewan Arts Councils (OSAC).

Three of the council’s earliest programs were the University of Regina Chamber Singers, local musician Janice Elliott, and the 40-voice Welsh Men’s Choir who performed in the Kindersley Composite School auditorium. The council provided a potluck supper and a reception.

During the first year of the Arts Council’s operation, a $25 scholarship was donated to the Kindersley Music Festival, a practice which has been continued.

In March 1980, Kindersley and District Arts Council members made a delegation to Town Council with regard to the proposed Civic Centre and requested proper acoustics, permanent seating, dressing rooms, stage, sound, and lighting equipment, and locked storage for a grand piano.

In 1985, Kindersley hosted the provincial OSAC Showcase, and did so again in 2001.

When the Norman Ritchie Community Centre was officially opened, the Arts Council was responsible for raising one quarter of the purchase price of the building.