In 2012, the “Great Idea Campaign” was launched, and it fostered the idea of a Town Square in Kindersley.

This initial concept of a centralized gathering place including a public art focal point became the seed from which one of the most exciting community projects to date was born. After assessing available land, existing infrastructure, and the inclusion of other potential community features, Baker Park was identified as a prime location near to the downtown core. 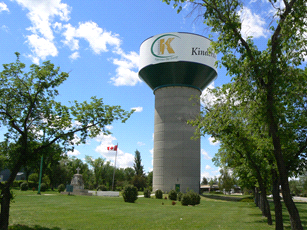 The intent of the Town Square project is to create a versatile and enjoyable public area within the community that will accommodate many demographics and interests, introduce new components not found elsewhere in Kindersley, and still retain the charm, natural beauty, and features unique to Baker Park.

Public art, seating, and ceremonial placement of the existing cenotaph are primary components, while the vision of the proposed Town Square has been expanded to include other features such as an outdoor spray park, performance area, and other multi-season components. Retention of Baker Park’s existing trees and natural foliage is also of utmost importance, so the design must enhance the existing green space with modern and sustainable landscaping.

Winnipeg-­based firm Nadi Design was selected for the project from among 10 distinguished proposals from across Canada that were submitted in response to the Town’s Request for Expressions of Interest in May 2013.

In preparing their draft designs, Nadi consulted with the public through a variety of stakeholder committee meetings, and public consultations open to the entire community.

4 distinct draft designs were unveiled to the public on Sunday, September 29, 2013 as part of Kindersley’s annual Culture Days celebration. Public voting began that day and continued until October 31, during which time members of the public are given the opportunity to help determine what design and features best fits their vision for a Town Square in Kindersley.

A total of 339 votes were received for the four concepts prepared by Nadi Design.

Along with selecting a favourite design, each voter was given an opportunity to rank the importance of the various components that were included in the design. The inclusion of a spray park water feature was among the highest ranked.

The winning concept, Desire Lines, became the primary blueprint for further planning work, and preferred components from the other designs were incorporated accordingly.  This included retaining as much of the existing trees and landscaping as possible, making sure the space was well-lit, and limiting hardscape. The construction of a gazebo and terracing around the base of the water tower was a component of the designs that also received a majority of favourable responses.

Due to budgetary restraints, the decision was made to construct the spray park first within the overall concept of the Town Square design, with the hope of being able to implement the rest of the project in years to come.

Construction of a spray park was considered for several years and public interest was echoed again through the Great Idea Campaign as well as a variety of community consultation sessions. For this reason, it was incorporated as a water feature within the proposed Town Square design and was the most preferred component in the voting process.

Construction of the spray park was more than 50 percent funded through private donation.

The Kindersley Spray Park was completed in September 2014. It  features 13 unique water components that can be activated easily for all ages to enjoy. Please ensure that children using the spray park are adequately supervised at all times. 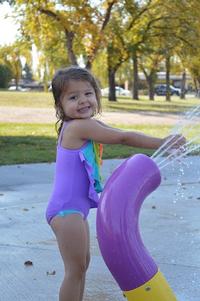